We want to keep our players safe, and expect a high level of respect among our players. Remember, leagues run through the EMSA Zones, must have discipline information and inquiries go to the zone they play in, before contacting EMSA. 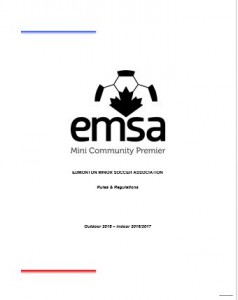 Please also notice that as per EMSA BOD decision on March 27, 2014, starting the 2014 Outdoor Season, the U12s will be playing 2 halves of 35 minutes each (total 70 minutes game). The online ASA Rules of The Game for U12 currently do not reflect this change as this is an EMSA BOD decision for the EMSA league.

FIFA Laws of the Game